More videos can be viewed on our YouTube channel HERE

We strive to put a correct, intelligent, loving miniature donkey on the ground that is every bit as good, if not just a little better, than their parents.  Bone structure is number one priority, if it isn't there the animal is not going to be able to function as a performance animal and is not going to be able to do the work that they were originally bred to do, pull wagons/carts.  In this area we feel that size matters, we want something that is going to be more than just a pasture pet so we try not to breed below 32" though a teeny, tiny does pop up now and then.  Our very first jack Circle C Clearly Canadian (Cinnamon) is just 30.5" and we use him on first time jennets hoping that their first baby is not going to be really big and a difficult birthing problem for them.

We are also concerned about attitude.  If the intelligence to learn new things and retain the old isn't there, the animal isn't going to be of use.  We want our donkeys to have a willing attitude and kindly look about the eye.

And of course, they should be very accepting of human company, seeking it out whenever possible.

We never breed for color; that is just frosting and if the underlying structure isn't there, color won't get the job done.  We do have a wide variety of colors but all serendipitous.

Started in 1996, Moonshine Meadows has come a long way in the intervening 19 years.  Beginning with 2 jennets we moved from Pasco, Washington to Aiken, South Carolina and 5 years later we moved from Aiken to Middleton, Idaho with 25 donkeys.  In SC we started showing at halter in the trail classes as well as the breed classes.  Watching the Driving classes was fascinating and I really, really wanted to start doing that as well.  After moving to Idaho I had no idea who to contact to get me started in driving when into our yard drove Jim Mullenberg.  He had vast experience with driving mini horses and had taught many of them as well as mini donkeys to drive and was ready and willing to get us started.  We haven't looked back or regretted the driving decision.  It is my very favorite thing to do with the burros.  Raising our own driving/performance animals is such a thrill.  Planning a breeding, watching that baby grow into a strong, intelligent willing partner has been a very rich, rewarding experience.

One of my favorite things to watch is herd dynamics, who buddies up with whom, who is friends with whom, who eats or plays with whom.  The new babies tend to be friends with the baby of their mom's friend, but not always.  Sometimes it is a real surprise.  Usually the babies buddy up with a same sex pal but every once in a while it is girl/boy and that can be a real big hurt when it comes time to wean cause not only do they lose their mom, but their very best friend as well.  Over the years we've had only 3 pairs that I have refused to separate.  They picked one another out within days of being born and were seldom more than 20 feet from one another.  I could never break them up or hurt them by seperating them.

We never ever sell our donkeys for guard donkey purposes.  They may have the heart but do not have the size to back it up.  We are suggesting that those who want guard animals look at  Maremma or some other breed of guard dog.

It is a close bond they form toward one another especially after 10-15 years together.  One of those friend apirs lost the older one and the younger one spent the next 4 months off in the corner of the barn by herself totally disengaged from the rest of the herd.  We thought we were going to lose her as well to grief.  We didn't but she has never found another friend like her old one.  Such loving loyal creatures.... 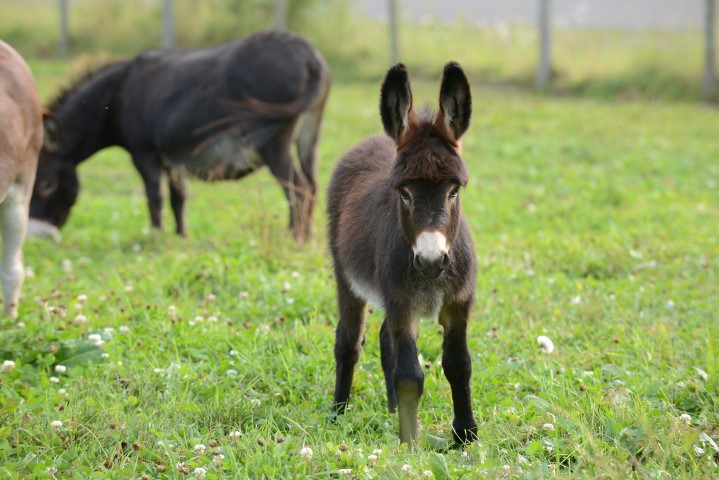 All images and text on this site copyright Moonshine Meadows. Please do not use our images or text without permission. To obtain permission please CONTACT US.